“As a teacher, I always explore the possibility that every single student can become an outstanding musician." — Akio Koyama

Akio Koyama has been working with music for sixty years. From the age of six, he started learning the recorder. At the age of 18, he hoped to continue his music studies at university, but since there was no such major at the university level in Japan, his teacher recommended switching to the bassoon. Four weeks before taking the exam, Koyama picked up the bassoon for the very first time. Relying on his foundation of playing the recorder, he played the sonata of Baroque composer Georg Philipp Telemann during the exam, and was successfully admitted to the Senzoku Gakuen College of Music in Japan. "After entering college, I was the worst student in my major, but my teacher taught me patiently every day like a father," he said. A year later, Koyama was admitted to the Kanagawa Philharmonic Orchestra.

While he was attending college, bassoon professor Albert Hennige from the University of Music Detmold in Germany came to Tokyo to give lectures at Koyama's university. At the conclusion of the 6-month course, Hennige refunded him his full tuition fees, and asked him to use the money to buy air tickets to Germany so he can continue his studies. Koyama embarked on his journey to study bassoon at the University of Music Detmold. "When I was in Japan, I accumulated very solid playing skills but after I came to Germany, I started to truly appreciate music," he said. He went on to win awards at the Ancona International Music Competition in Italy and the Prague Spring International Music Competition, and the rest was history. He joined The Tianjin Juilliard School as bassoon resident faculty last December. 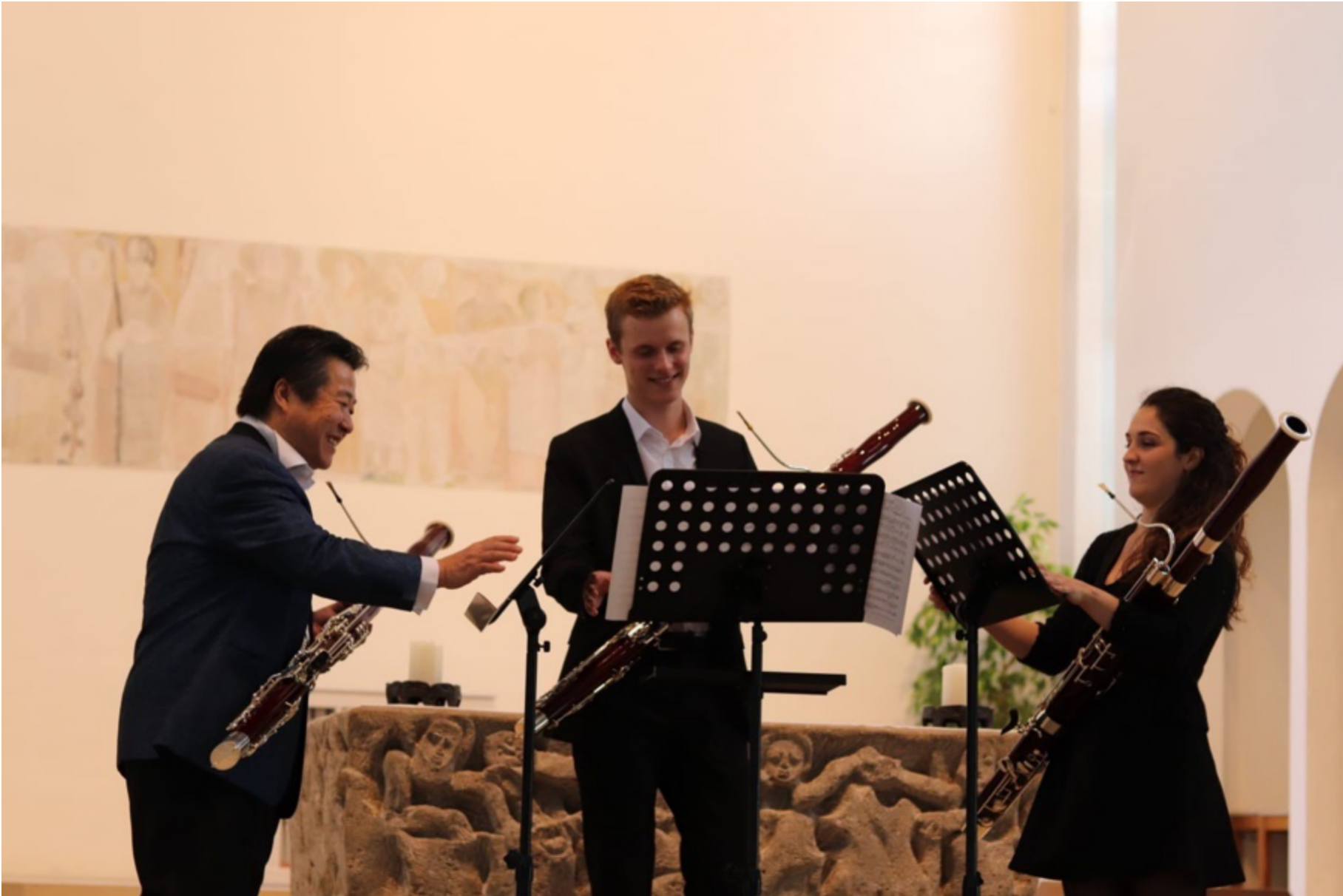 Akio Koyama with his students in Germany. Photo credit: Unknown

You spent many years performing and teaching in Japan and Europe. Have you spent much time in China?

My father used to be the principal of a school in Harbin, China. I have always regarded China as my father's second home. I first visited China in 2014. I have had Chinese students who are outstanding musicians. When word got out about Juilliard's new campus in Asia, it attracted everyone's attention in the European music education community.

In your 32 years of being a teacher,what have been some of the highlights?

Being a teacher is wonderful! I began teaching at the State University of Music and Performing Arts Stuttgart in 1988. Afterwards, I spent 25 years at the Trossingen National Conservatory of Music as a bassoon professor. For more than three decades, I have watched my students win awards, join orchestras, and become university professors. I pay special attention to relationships and treat all students as if they are part of my family. We share in the happiness as well as the pain. I hope that the students can have that feeling of happiness when playing the bassoon, and move audiences through their music.

TJS: You served as the principal bassoonist of the Darmstadt Symphony Orchestra at the age of 22. How would you describe the bassoon's role in an orchestra?

The role of the bassoon in the orchestra is very interesting, it supports the entire ensemble, but can also be solo. As a bassoon performer, one can only perform solo by learning to support others. If we were to use singing as a metaphor, the principal bassoon would be equivalent to the tenor and the second bassoon as the bass, distinct with contrasting colors.

What was it like working with Seiji Ozawa, the founder and artistic director of the Saito Kinen Orchestra?

Since 1990, I served as the principal bassoonist of the Saito Kinen Orchestra spearheaded by Seiji Ozawa. My orchestral life spent with Ozawa was really enjoyable. He is like clear spring water and always full of rich music. I am deeply impressed by his activeness and inexhaustible energy. During our time in the orchestra together, both of us were immersed in baseball, even at festivals. I was a pitcher and he was second base. Even if the opponent's team was strong and we lost the game, the after-game party was still enjoyable! I also have fond memories of a concert at Carnegie Hall where Ozawa was the conductor. I had performed with the Saito Kinen Orchestra, in collaboration with Isaac Stern. The audience stood up before the concert even began, loud cheers and applause followed, and the opening of the concert was delayed by more than 5 minutes as a result of this enthusiasm! We were very impressed by the warm welcome of audiences in America.

Do you have any words of wisdom to share?

Simply to love music! Enjoy the feeling of happiness through performing, as well as the ability to move audiences. I hope all my students will feel that way.